After getting a lot of useful comments (thank you!) on my initial brainstorming on possible topics for my master thesis I cut them down to three and handed in a description of three very broad topics, all with some more concrete research questions: (1) ‘Post-Postmodern’ Uses of Brands and Media?, (2) ‘Continuities from Propaganda Theory to Planning:’ and (3) Reception and Usage of ‘Transmedia’ Narratives.

So here’s my translated description of topic (1), that I handed in before leaving and which has got a strong endorsement from the prof while I was in Tanzania.

‘Post-Postmodern’ Uses of Brands and Media?

According to Holt (2002) there are two relevant branding paradigms in the 20th century. The first is called “Modern Branding” and was based on a domineering, cultural engineering approach. It was dominant until the 60s, when the ‘creative revolution’ around people like Bill Bernbach appeared.

Marketers made no pretense about their intentions in these branding efforts. They directed consumers as to how they should live and why their brand should be a central part of this kind of life. Advertisements shared a paternal voice that is particular to this era. By contemporary standards, these ads appear naive and didactic in their approach. This paternalism reveals that, at the time, consumer culture allowed companies to act as cultural authorities. Their advice was not only accepted but sought out. (Holt 2002: 80)

This modell – now being popularized by the TV series Mad Men – was inspired both by Freudian psychoanalysis and the scientific approach to advertising and persuasion at the time, provoked rising resistance in the 60s, with books like The Hidden Persuaders and other critical analysis appearing on bookshelves. With the increasing professionalization of the industry and knowledge about the branding paradigm more and more entering the public sphere, the public opinion was increasingly directed against the supposed manipulation of the individual.

Branding could no longer prescribe tastes in a way that was perceived as domineering. People had to be able to experience consumption as a volitional site of personal development, achievement, and self-creation. Increasingly, they could not tolerate the idea that they were to live in accord with a company-generated template. (Holt 2002: 82)

In reaction to the creative and anti-commercial countercultures of the 60s – and with that at the time when interpretative approaches started to challenge the predominant stimulus response thinking – a new branding paradigm emerged. Holt calls this paradigm “Postmodern Branding”. In a postmodern consumer culture, the role of branding would emerge from the supplier of a cultural blueprint – “How should I live?” – to supposedly authentic, cultural ressources to be used for the identity projects of consumers who strive for independence from paternalistic and authoritarian corporations.

Postmodern consumer culture has adopted a particular notion of authenticity that has proved particularly challenging to marketers. To be authentic, brands must be disinterested; they must be perceived as invented and disseminated by parties without an instrumental economic agenda, by people who are intrinsically motivated by their inherent value. Postmodern consumers perceive modern branding efforts to be inauthentic because they ooze with the commercial intent of their sponsors. (Holt 2002: 84)

To produce these ressources in a distanced and commercially disinterested way, five branding techniques – also made public by Klein 1999 and Frank 1998) have emerged over time: (Holt 2002: 83ff)

All of these techniques however, are confronted with substantial contradictions. Ironic distance has been imitated without end and is now outdated, stealth marketing is getting more and more aggressive and reaching its limits, marketers are running out of counterculture content to tap for their campaigns as the authenticity market heats up, consumers are increasingly peeling away the brand veneer and “collectively, postmodern branding floods social life with evangelical calls to pursue personal sovereignty through brands” (ibid.).

For Holt these phenomena (published in 2002 – before ‘social media’ even existed) pointed to an expiration of the postmodern branding paradigm. Whereas brands in the future would still have to offer authentic and relevant resources, authenticity won’t not be conveyed distance the brand from a profit motive, but through a role that Hold calls ‘citizen artist’.

So brands will become another of expressive culture, no different in principle from films or television programs or rock bands (which, in turn, are increasingly treated and perceived as brands). […] Postmodern brands have little value in this new consumer culture. Because they rely so much on the cultural work of disinterested others and work so hard to deny that the brand itself stands for anything by itself (for fear of being tagged as cultural engineers), postmodern brands lack an original point of view that they can claim as their own. Rather than take a free ride on the backs of pop stars, indie films, and social viruses, brands will be valued to the extent that they deliver creatively, similar to other cultural products.

The citizen part on the other hand is concerned with the socially responsable behavior of corporations and their brands, basically answering the question of what is behind the brand veneer. 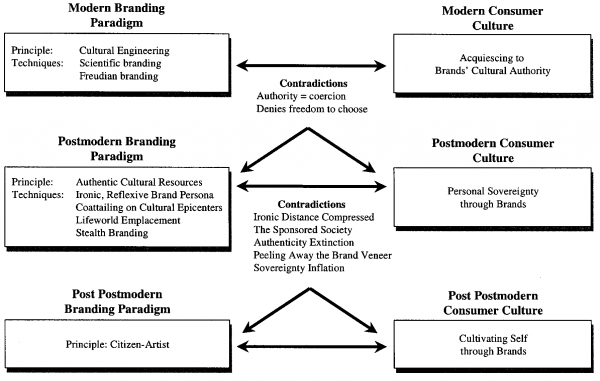 This topic and Holt’s only superficially covered hypotheses give rise to a lot of questions that might be covered in a master thesis. (Not all in one of course …) When I said I wanted to go to Tanzania for the Great Football Giveaway, I knew this was going to be in the middle of my last winter term and I knew I’d miss one session of each my classes – including the master thesis seminar of my communication and media science MA. This is basically the last class of the program and is designed to prepare us for conducting the masters research and writing the thesis, give us some exposure to profs (that’s not that common here). However, for a lot of administrative reasons, 4 weeks into the semester we haven’t had a class yet and the first class will be held in a 3-hours session while I’m out there giving out footballs. So instead of me missing the third 1 1/2 hour session, we have until the 7th to deliver a 1-2 pages description of our topic and I won’t be there at the first session held.

1) Use and Reception of (Post-Postmodern-)Advertising

This is basically inspired by Douglas B. Holt and his cultural research into branding and advertising. Holt stated in 2002 that there are 5 contradictions that contribute to the end of postmodern branding and that give rise to brands as citizen artists. He then goes on to hypothesize about a spectrum of brand and media uses that people would resort to. Now this topic is obviously huge, could use some empirical research and might be tackled from a lot of different perspectives but I’m not quite sure which one might be the most interesting and fruitful approach.

Subtopics of this bigger area of interest might be:

I would have written transmedia here but as it’s the last thing sucked dry by the industry I’d rather stick to cross-platform. I find this topic quite interesting for a while now but it has never been a research focus of mine and it’s never been one of my institute. Still, something that Dan Hon said at TEDxTransmedia re-ignited my interest. He basically asked us to imagine what it would have looked like if Amelie would’ve gotten the “transmedia treatment” just like Heroes, Lost and all the geeky or more “male” franchises. And that prompted me to think about how the realities of cross-plattform narrative use and reception actually looks like, away from industry hype and glory.

We all know IDEO and are well-aware of the gameification hype so there’s no need to use a lot of words here. I’ve had a fairly interesting theory seminar about organizational comms last semester and also read a bit into organizational culture, management and organizational thinking styles. I think that play(ful communication) and abductive thinking might be something worth looking into from an empirical and theoretical perspective. But this is still very, very raw.

4) History lessons: Propaganda Theory vs. Planning in a Convergent Culture

Basically a look into historic developments and continuities. I had a very, very interesting lecture about the history and theory of propaganda last semester and have developed a strong interest into the relationship between conceptions of men and theories. Looking at the “perfect product claim”, social media etc I think a theorizing look back in time might be fruitful. But then again that might just be liking to sound smart.

So in case you’ve read this until here, if you’d chip in a thought or two that’d be much appreciated. Does it all sound like BS? Is it relevant or interesting to you? Has it been done before?